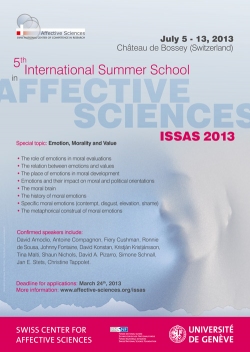 It is often thought that emotions cloud our judgments and that assessing the true value of something requires cold and dispassionate reflection. However, in opposition to this pessimistic conception of the relationship between judgments of value and emotions, a long-standing tradition has stressed the importance of emotions in such judgments, making affective reactions our privileged way of accessing values. According to this tradition, emotions are not only caused by judgments of value, but can also be the source of these judgments.

This summer school proposes to approach the question of the relationship between emotions and values by focusing on the role emotions play in our moral lives. Questions that will be addressed include the interaction between emotions and moral judgments (do emotions play a role a role in the formation of our moral evaluations? and should this role be viewed as a mere external bias or can it be considered to be the normal way, or even a reasonable way, of reaching a moral verdict?) and the role of emotions in moral development (are there emotional reactions that are necessary for the full development of our moral abilities? does moral development also include emotional development?). The school will also focus on the different moral functions of particular emotions, such as contempt, disgust, elevation or indignation, and the way the field of moral emotions has been carved throughout history, and by various cultures and languages.

This summer school proposes to bring together and integrate the multiple and complementary ways of investigating the relations between values, morality and the emotions by presenting fundamental theories, major research paradigms, cutting-edge methodologies and significant results from different disciplines.

In addition, hands-on workshops will be conducted on research methodologies in the study of morality from the vantage point of philosophy, psychology, neuroscience, linguistics and the history of emotions. Students will be given the opportunity to put their freshly acquired knowledge to use by working daily in small groups, a process that will result in the production and presentation of an interdisciplinary research project.

The scientific coordination of the 2013 edition of ISSAS was carried out by Dr. Florian Cova, a postdoctoral researcher at CISA heading a project on the development of experimental methods in aesthetics and philosophy of art through a Cogito Foundation grant, and coordinating a second project on the role of emotions in moral cognition.