BREXIT a constitutional crisis for the EU and the UK? Conference-debate by Prof. Tobias Lock - 4 April 2019

BREXIT a constitutional crisis for the EU and the UK?

On the 23rd of June 2016, in a non-binding referendum, the UK decided by an almost 52% majority to leave the EU. The UK, arguably, has been in crisis ever since.  On the 29th of March 2017, the new Prime Minister, Theresa May, notified the EU, under article 50 of the Treaty on the European Union (TEU), of the UK’s intention to leave.  So began 2 years of difficult negotiations which ended in November 2018 with the signing of the Withdrawal Agreement and Political Declaration on the future relations between the UK and the EU.

However, after twice failing to pass this deal through the House of Commons, losing both votes by historic margins, Theresa May addressed another letter to President Tusk asking for a short extension of the article 50 period.  In response, the European Council granted the UK two new deadlines: if the UK Parliament accepts the withdrawal agreement by 29th March, the period will be extended till the 22nd May, if it does not, the UK will leave the EU on 12th April without a deal, unless it can “indicate a way forward”.  At the time of going to press, it has not been announced when a third vote will take place, and it is even less clear whether it would pass. The UK’s government is in turmoil: its solicitor general has called the situation “a major constitutional crisis”; Theresa May, in an incendiary televised address, blamed Parliament; and Parliament, for its part, seems poised to take the process out of her hands.

For the EU, the way has seemed smoother, but this is still the first time a member state has decided to make use of the article 50 process and leave. It has had to manage the hole left in its Parliament and its budget, as well as deal with questions over the continuity of UK personnel within its institutions.  Decidedly, this unprecedented situation has caused, and certainly will continue to cause, huge constitutional challenges to the UK and the EU.  Prof. Tobias Lock, Professor of Law at Maynooth University (Ireland), will attempt to make sense of this state of affairs with a timely conference on the 4th of April 2019 entitled: ‘Brexit : A constitutional Crisis for the EU and the UK?’

Discussant: Angus Wallace, PhD Candidate and Assistant at the GSI 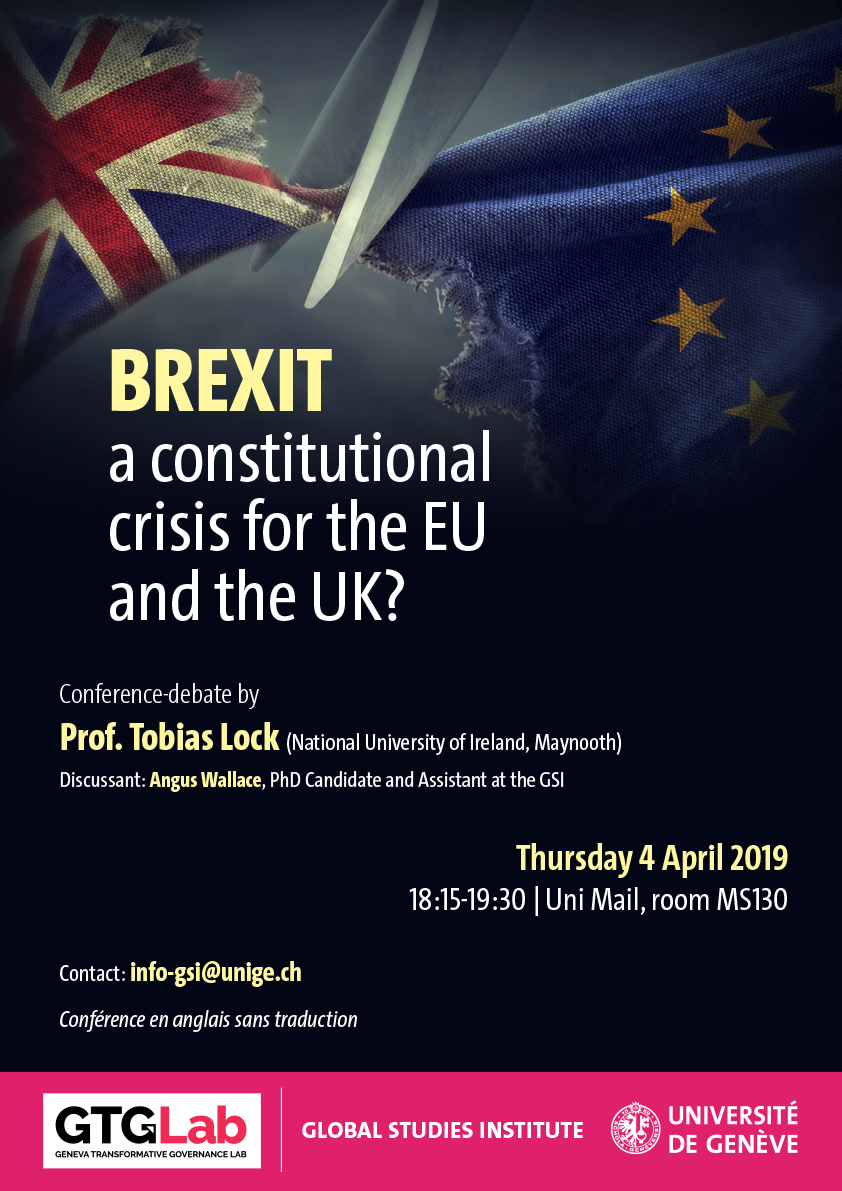