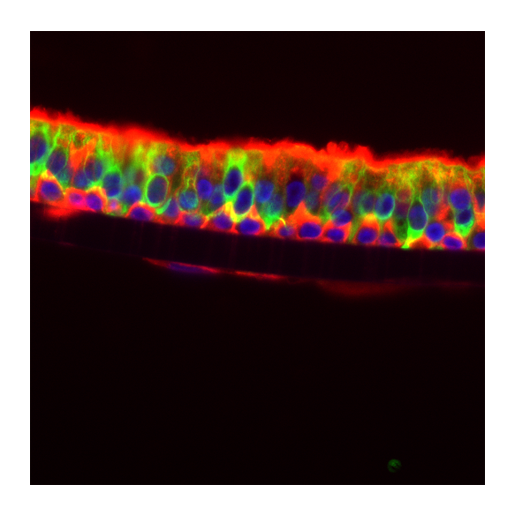 Hallmarks of cystic fibrosis (CF), which results from mutations of the cystic fibrosis transmembrane conductance regulator (CFTR) gene, are chronic pancreatitis and bronchitis. The airways and lungs of CF patients are chronically infected by opportunistic pathogens but the links between the CF gene defect and the CF lung phenotype remain unclear. Increasing evidence suggests that CF epithelial cells exhibit a hyper-susceptibility to stress and infection, leading to an exaggerated innate immune response and abnormal repair after injury. The identification of the molecular basis of CFTR-dependent alteration in cell homeostasis is the subject of intense research.

In this context, we are focusing on gap junctions, the channels that mediate the direct and regulated transfer of ions, metabolites and second messengers between cells. We have found that the regulation of these channels is defective in CF epithelial cells. Our aims are to unravel:

To address these questions, we are combining cell biology, electrophysiology and imaging approaches on a variety of models including cell lines, primary cultures of human airway epithelial cells at the air-liquid interface and transgenic mice and rats. Gap junction proteins may represent pharmacological targets to modulate the innate immune response.