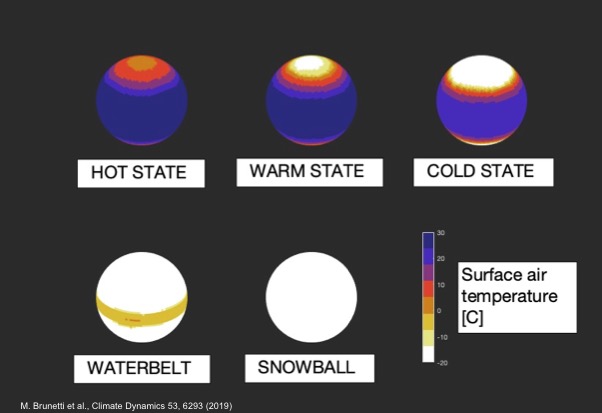 Reconsidering the habitability in the light of climate multistability

Most habitable zone determinations are currently based on energy-balance models or 1D climate models adapted from terrestrial models, taking into account the expected/assumed exoplanetary conditions. For instance, in energy-balance models, the balance between the incoming stellar energy flux and the outgoing radiation defines an equilibrium temperature, which should be compatible with the basic life mechanisms to define habitability.

We propose to apply this approach to exoclimate studies, by considering the whole range of potential conditions offered by the various stable climate states in the assessment of habitability.

In the mid-term, exoclimate multistability could be investigated in a wider range of conditions, more representative of the variety of exoplanet conditions, also corresponding to different ages of the planetary system. This will however require further developments of the models. This includes adapting the emission spectrum of the star, or the atmospheric composition, to consider a wider range of candidate planets.

Furthermore, model intercomparisons, for instance using the MITgcm and the LMDz generic GCM, would allow to assess the robustness of the first results, in terms of the existence of multiple stable states, but also their conditions (temperature, etc), and their stability and the size of their basin of attraction, hence the probability to retain a given (habitable) state for sufficiently long times.

A key challenge for climate simulations in the context of planetary evolution and even more considering life is the mutual interaction, on “long” times scales, between the climate, geologic and tectonic processes, and life. Here, “long” refers to tens of thousands to millions of years, well beyond the “short” timescale of climate, which lies in the 100 to 1000 years range. On Earth, these couplings include weathering of minerals, changes to the carbon cycles, or changes to the atmosphere composition under the action of living organisms.

With inputs from geologists/planetologists/evolutionary biologists, we will develop two-way couplings between the long- and short-terms models in order to handle these feedbacks. More specifically, the tectonic and biological state of the planet will be provided as input conditions for the climate models, which will define a “fast” steady-state climatic situation, which in turn will be used to model the “slow” evolution of the planet, and so on.