The Law and Practice of Trademark Transactions

The Law and Practice of Trademark Transactions is a comprehensive analysis of the law governing trademark transactions in a variety of legal and business contexts, and from a range of jurisdictional and cross-border perspectives. After mapping out the international legal framework applicable to trademark transactions, the book provides an analysis of important strategic considerations, including: tax strategies; valuation; portfolio splitting; registration of security interests; choice-of-law clauses; trademark coexistence agreements, and dispute resolution mechanisms.

Practitioners advising trademark owners, including trademark attorneys, will find this book to be an invaluable resource for their practice, particularly where cross-border issues arise. It will also be a key reference point for scholars working in the field.

« [the book] will serve as an excellent reference book for anyone practising in international trademark law, or handling international business transactions ».

‘Doubtless, this book will fulfil the editors’ hope that it will serve as source of valuable guidance and reference for scholars and practitioners alike  in relation to the law and practice of trademark transactions. It should certainly be part of the assets of corporate and intellectual property lawyers involved in cross-border transactions. The editors are to be congratulated for being able to gather 24 eminent scholars and practitioners from various jurisdictions to join in a worthy cause. The publisher, Edward Elgar Publishing, must also be commended for the fine production of the book.’

‘Irene Calboli and Jacques de Werra have put together a comprehensive look at trademark transactions throughout the world. Essential reading for specialists in international trademark law and for anyone who wants to understand more about laws other than their own.’

‘Commercial transactions involving trademarks, especially across borders, have received scant in-depth attention in law literature. With insights from the emerging markets of Brazil, China and India to the EU and USA via Australia and Japan, this book deals with the multifarious aspects. The reader will finish it not only with their knowledge greatly enhanced but convinced that, at least in this field, the world most certainly is not flat.’

‘An incisive, must-have book for every practitioner or scholar who is serious about trademark transactions. The key areas of this crucial subject are compellingly unpacked by famous authors from around the globe in a user-friendly format. Outstanding scholarship and presentation.’

– Frederick Mostert, University of Oxford, UK and Past President of the International Trademark Association

The Law and Practice of Trademark Transactions: A Global and Local Outlook” addresses the challenges posed by the territorial nature of trade mark law in the international market. The book is divided into two sections; Part 1 – Trademark transactions in the global marketplace and Part 2- Trade Mark Transactions at the Regional and National Level.

Part 1 examines strategic use of trademarks and is particularly helpful to practitioners as it addresses problems which may arise when contracting for trademarks. Each part is further subdivided into themes. Part 2 is useful for those interested in acquiring an understanding of how trade mark law operates in specific areas, namely; the EU, the UK, Germany, France, the US, Brazil, China, Japan, ASEAN and India.

In Section A: International Framework, Chapter 1, Daniel Gervais explains the key provisions of the The Agreement on Trade Related Aspects of Intellectual Property Rights (TRIPs), most likely to affect trademark transaction rules. Articles 15, 19.2, 20, and 21 are discussed in detail. The normative framework of the World Intellectual Property Organisation is then comprehensively explained by Marcus Höpperger in Chapter 2. This section lays the foundation for subsequent chapters.

Section B: Strategic Considerations, focuses on how to make the most out of trademark assets. Chapter 3, written by copyright expert Jane Ginsburg, examines the overlap between copyright and trademark rights in visual characters. It considers what happens when a character falls into copyright public domain, the creation of derivative works, the reversion of the copyright in the character to the author and redesigning trademarks as copyrightable characters. Chapter 5, by Gregor Bühler and Luca Dal Molin advises on the procedure that should be followed when a company sells a brand division but wants to continue using the trademark in other existing divisions.

Section C focuses on Valuation, Taxation, Security Interests and Bankruptcy. Chapter 7 by Roy D’Souza will be useful to those interested in the aforementioned Chapter 5, as it focuses on brand valuation strategies. The last Section in Part 1 looks at Dispute Prevention and Settlement Mechanisms. In Chapter 12, Dai Yokomizo instructs that choice-of-court and choice-of-law clauses in international trademark transactions are often uncontentious. In the event of a dispute, Jacques de Werra (editor) presents routes for resolution, with a focus on arbitration, in Chapter 13. Part II considers trademark transactions in different regions and is divided accordingly.

The editors, Irene Calboli and Jacques deWerra have done a great job in ensuring that a range of practical topics are covered. In light of recent events, Chapters 14 – 17 which examine trademark transaction in Europe, will be of particular relevance to readers.

Over the years this blog has covered several interesting issues pertaining to trademark transactions. Illustratively these include disputes arising out of trademark transactions (the Tiger and Maaza disputes), taxation of trademark assignments (the recent Fosters case), arbitration of IP disputes (the Telemax case & the IPRS v. ENIL case), co-ownership of trademarks after the splitting of family businesses and general strategies on licensing and securitisation of trademarks. The increasing value of trademarks to Indian businesses can also be gauged from the role played by trademarks in recent scandals such as the Kingfisher loan scandal where a loan was granted against a trademark which lost most of its valuation due to its financial situation.

All of these cases demonstrate the complexity of trademark transactions, a subject area which lies at the intersection of trademarks, contracts, arbitration, bankruptcy, competition law, valuation, private international law and taxation. It is usually difficult to find books which focus on such a niche practice area. I was therefore more than keen on reviewing this new book – The Law and Practice of Trademark Transactions: A Global & Local Outlook. Featuring contributions from around the world, the book is jointly edited by my colleague Irene Calboli, Deputy Director, ARCIALA, SMU along with Jacques De Werra, Professor at University of Geneva.

Reviewing a book like this, which is written together by 23 different authors, is complicated. It is however safe to say that the editors Calboli and Werra have accomplished a herculean task in presenting perspectives from a diverse range of views on a complicated issues cutting across different practice areas. Indian practitioners will most likely be interested in the country-wise chapters which have mostly been authored by leading practitioners in their respective jurisdictions and which flag important issues in each jurisdictions. Some of the other chapters on the business aspects such as the chapter on transactions splitting trademark portfolios, valuation, taxation etc. will be of interest to both legal and business practitioners. Two of the theoretical chapters by Jane Ginsburg and Shubha Ghosh are particularly interesting. Ginsburg covers the issue of overlap between trademark and copyright in protection of characters and the licensing issues arising out of such transactions. Ghosh’s chapter proposes applying an existing theory of non-price competition developed by Albert Hirschman (exit, voice and loyalty) to trademark transactions. I think it is an idea with much promise.

While it is unfair to expect a work of this nature with 23 different authors and topics to cover more than it already has, I do wish the book also focused a bit more on the basic differences in the commercial law framework in civil law and common law countries. For example, contract law and specific performance work very differently in both systems. Contract law is such a fundamental issue of transactional law that it is necessary to understand the basic differences between civil and common law countries in order to fully appreciate the complexity of international trademark transactions. It would have also been great, if the book could have tackled some of the more controversial policy issues arising out of double taxation avoidance agreements, especially the tax treatment of trademark royalties – does the present model give developed countries an unfair advantage?

PART I: TRADEMARK TRANSACTIONS IN THE GLOBAL MARKETPLACE

3. Licensing Commercial Value: From Copyright to Trademarks and Back
Jane C. Ginsburg

4. The Complexities of Domain Names Transactions: Contracts for a Market Where Value Increases with Time
Cédric Manara

5. How to Make Two Out of One – the Ins and Outs of Trademark Portfolio Splitting Transactions
Gregor Bühler and Luca Dal Molin

10. The Intersection of Trademarks, Licenses and Bankruptcy: Ending Uncertainties in the Law
Xuan-Thao Nguyen

11. Out of the Shadows: The Unique World of Trademark Consent Agreements
Neil Wilkof

PART II: TRADEMARK TRANSACTIONS AT THE REGIONAL AND NATIONAL LEVEL

A. Trademark Transactions in Europe

16. Trademark Transactions in Germany: A Continental European System Moves Towards Common Understanding with the US
Axel Nordemann and Christian Czychowski

17. French Perspectives on Trademark Transactions: from the Civil Code to the Business Law?
Nicolas Binctin

B. Trademark Transactions in North and South America

18. Trademark Transactions in the United States: Towards a De Facto Acceptance of Trading In Gross?
Irene Calboli

20. Chinese Trademark Law and Trademark Transactions: A Law in Transition in the Global Economy
He Guo 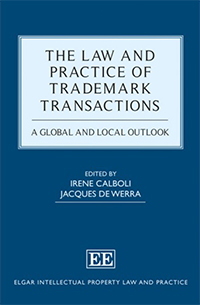