Parution de l'ouvrage "The palgrave book of economics and language" 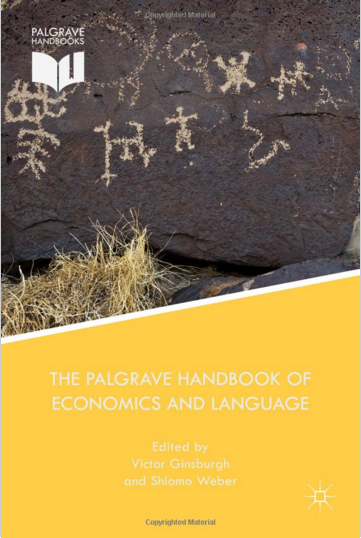 The Palgrave Handbook of Economics and Language
In this handbook, Victor Ginsburgh and Shlomo Weber bring together methodological, theoretical, and empirical studies in the economics of language in a single framework of linguistic diversity that reflects the history and contemporary study of the topic. The impact of linguistic diversity on economic outcomes and public policies has been studied not only by economists and other social scientists in the contemporary era, but all the way back to the 19th century by geographer and naturalist, Alexander von Humboldt, who emphasized the importance of language in the framework of cultural experience.
This interdependence of language and culture is reflected in the chapters in this handbook, which have been written by leading economists, linguists, and political scientists from universities in the United States, Australia, Russia, Israel, the United Kingdom, France, Spain, Belgium, Germany, Switzerland, Denmark, Finland, Hungary, and the Czech Republic. The contributions are divided into four parts. Part I examines linguistic concepts that forge common ground between economists, political scientists, sociologists, and linguists, and introduces the notion of linguistic proximity extensively utilized in various chapters of the volume. Part II assesses the impact of languages on market interactions, including international trade, patent protection, migration, and use of languages in ancient and modern business environments. Part III focuses on the link between linguistic policies and economic development, including the analysis of regional development in Asia, Africa, Europe and Russia. Part IV addresses issues of globalization, minority languages, and the protection of linguistic rights in multilingual societies. 17 mars 2016   Actualités

The palgrave book of economics and language