The Institute of Global Health (ISG) was founded in January 2014 as a transformation of the former Institute of Social and Preventive Medicine. This transformation was decided by the University of Geneva as a continuation of efforts to develop academic global health given the unique location of Geneva in the field. Geneva hosts most of the major actors of global health: the World Health Organization, UNAIDS, the Global Fund to fight AIDS, Tuberculosis and Malaria, ICRC, GAVI, FIND, MSF and many other NGOs and foundations, with diplomatic permanent UN representations for more than 140 countries. The creation of the Institute of Global Health was inspired by a shared commitment to foster academic Global Health at the Faculty of Medicine of the University of Geneva. It is located in the facilities of Campus Biotech shared by the University of Geneva and Ecole Polytechnique Fédérale de Lausanne (EPFL).

The M8 Alliance of Academic Health Centers, Universities and National Academies is a network of academic institutions committed to improving global health and working with political and economic decision-makers to develop science-based solutions to health challenges worldwide.Founded in 2009, it has since provided an outstanding academic foundation for the yearly World Health Summit.

The Institute of Global Health hosts the scientific secretariat of the World Federation of Public Health Association and the University of Geneva is a founding member of the Swiss School of Public Health which gathers 12 Swiss University members. Antoine Flahault has been elected as its deputy director since 2019. 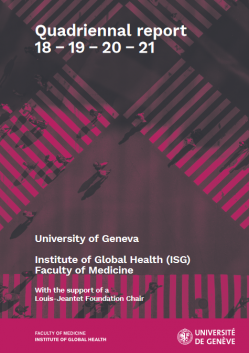