Current and past research projects of the group:

The FNS project Epistemic Emotions: Nature and Roles is funded by the the Swiss National Foundation and based at the Department of Philosophy, University of Geneva. It is directed by Pascal Engel and involves one post-doc position, held by Anne Meylan.

Summary.   Various affective phenomena — e.g. intellectual courage, astonishment, curiosity, interest, wonder, surprise, the feeling of certainty, the feeling of doubt, the fear of the unknown, misology1, the joy of verification, the feeling of knowing — have been labelled «epistemic emotions or feelings». Two main questions deserve to be asked about epistemic emotions: first, what are they? Second, what role do they play in epistemic activities such as deliberation, belief revision and inquiry? The project is, accordingly, divided into main parts that are further subdivided into four research modules. The first part is dedicated to investigating the affective (module 1) and the epistemic (module 2) nature of the so-called «epistemic emotions» and «epistemic feelings». The second part looks at the causal (module 3) and justificatory (module 4) roles that the formerly delineated epistemic emotions could play in our epistemic activities. The intended research would rely on studies into particular epistemic emotions or feelings already carried out by psychologists and cognitive scientists and by philosophers writing on emotions in general.

The FNS project Knowledge-based Accounts of Rationality is funded by the the Swiss National Foundationand based at the Department of Philosophy, University of Geneva. It is directed by Pascal Engel and Fabrice Teroni and involves one post-doc position, held by Davide Fassio, one PhD position, held by Jacques Vollet, and one post-doc collaborator, Julien Dutant.

Summary.   What we ought to do and to believe depends on what we know. The idea may appear obvious. It reflects the way in which many decision makers, scientific experts and ordinary citizens think. For instance, they will say that we should not market a drug which we do not know to be safe enough. Yet dominant theories of rationality reject it. Standard decision theory, bayesian accounts of scientific rationality and many ethical theories are internalist: they hold that what is rational for us to do and to believe depends on our internal mental states alone, such as our beliefs and experiences, rather than on what we know (Wedgwood, 2002). However, internalist views of rationality are increasingly challenged within epistemology (Williamson, 2000; Hawthorne et Stanley, 2008; Sutton, 2007; Pritchard, 2012). The present project builds on these developements in order to elaborate a full-blown account of rationality in terms of knowledge. It aims at reconciling our fundamental theories of rationality with the way in which scientific experts, decision makers and ordinary citizens think about rational decision and belief.

The first stage of the project investigates knowledge-based accounts of rationality applied to particular domains: belief, action and emotion (modules 1.b, 1.c and 1.d, respectively). It will also review the related debate on the knowledge norm of assertion (module 1.a). This stage will allow us to bring together the scattered discussions of knowledge-based norms in recent literature. In the case of emotions, it will also open up new lines of research.

The second stage states and discusses fully general accounts of rationality in terms of knowledge. For their general structure, we draw inspiration from analyses of rationality in terms of reason and belief in ethics (module 2.a). We set out a range of motivations for such accounts (module 2.b). Some are general, such as the fact that there appear to be normative differences between knowledge and true reasonable belief that internalists leave out, or the fact that knowledge-based accounts provide a better explanation of various norms of inquiry. Others are specific, such as the fact that internalists have a hard time explaining the rationality of memory-based belief. We consider the main internalist challenge to knowledge-based accounts (module 2.c.). We lay out various options of response and their implications.

The projet will last 36 months. The first stage is mainly completed in the first year, and the others are completed in parallel during the second and third year. It is organised around a weekly seminar with guest speakers every other week. Four members are involved: a professor, an advanced researcher, a post-doc and a candoc. It is a collaboration between the Episteme and Thumos groups in Geneva (departement of philosophy and Centre Interfacultaire en Sciences Affectives) and the Institüt für Philosophie in Bern.

The FNS project Knowledge, Evidence and Practice is funded by the the Swiss National Foundation and based at the Department of Philosophy, University of Geneva. The project is directed by Pascal Engel and involves a post-doc position, held by Santiago Etcheverri, and a PhD position, held by Arturs Logins. Julien Dutant and Anne Meylan also contribute to the project.

Summary.   Knowledge, on the traditional picture, enjoys no principled relationship to action although there are indeed parallels. Knowledge and action are the main relations between our minds and the world. In action to use the familiar metaphor, the direction of fit or of adaptation is from world to mind. Beliefs aim at knowledge, desires aim at action. In knowledge mind is directed and adapted to the world. When our beliefs are taken to be false, we are led to reject them or to revise them. When our desires fail to be satisfied, we feel no such pressure to change them. Knowing is one thing, which belongs to the theoretical realm and obeys its laws, and acting is another thing, which obeys the requirements of the practical realm, which are, at least prima facie, independent. Knowing is understood classically as a relation to propositions, which are, when known, true. There is a strong division between theoretical knowledge on the one hand – knowing that – and practical knowledge – knowing how – on the other. The justification of our beliefs is a matter of their being based upon evidence and seems to have nothing to do with the outcomes of our actions. Theoretical reasoning, which moves from beliefs to beliefs, is distinct from practical reasoning, which goes from beliefs, desires to intentions and to actions. Indeed theoretical rationality and practical rationality are as distinct as chalk and cheese. This is reflected in the structure of classical decision theory: on the one hand there are degrees of belief as subjective probabilities, on the other hand there are degrees of utility and desirabilities. In Moreover the logic of decision obeys principles which are distinct from those of the logic of belief revision. The fundamental separation between theoretical and practical reason is also reflected at the level of the fundamental structure of reasons and values. Theoretical reasons are one thing, practical reasons another. The structure of justification is not the same and each domain is separate from the other. Cognitive and practical values fall apart. This traditional picture, however, has become more and more under strain in almost all of its aspects, and the relationships between knowledge and action have become more and more prominent in recent theory of knowledge, formal epistemology and philosophy of mind. We intend to focus upon the three following strands (which by no means exhaust the possible issues related to knowledge and action).
Strand 1: Theoretical knowledge vs. practical knowledge
Strand 2: Evidence and practice
Strand 3: Pragmatic encroachment on knowledge and justification

The FNS project Perceptual Warrant, Entitlement and A Priori Knowledge is funded by the the Swiss National Foundation and based at the Department of Philosophy, University of Geneva. It is directed by Pascal Engel and involves one post-doc position, held by Anne Meylan, and one PhD position, held by Ariel Cecchi. Julien Dutant and Katsuya Takahashi also contribute to the project.

Summary.   This project adresses the problem of the justification of our perceptual beliefs and of the nature of perceptual evidence. Like most contemporary writers we shall call the generic notion of justification involved warrant. It is usually assumed that classical foundationalism fails for perceptual beliefs, and that a coherence conception justification is equally defective. It is also agreed that the usual divisions between “internalist” conceptions of justification (which requires that one has access to one’s justifications) and “externalist” ones (which do not require access) are inadequate. Recent theories of justification have distanced themselves from both foundationalism and coherentism. On the one hand, some theories have tended to concentrate directly upon the nature of knowledge, by insisting on a condition of “safety” (if one knows that P one could not easily have been wrong). On the other hand some theoreticians have accepted the idea that there can be prima facie, defeasible justification. Our plan is to discuss the application of these approaches to perceptual knowledge.

The FNS project Knowledge, Reason and Norms is funded by the Swiss National Foundation and based at the Department of Philosophy, University of Geneva. The project involves Pascal Engel, Anne Meylan and Julien Dutant.

Within the newly created Pro*Doc Graduate Programme in Philosophy, funded by the Swiss National Foundation, and based at the Universities of Fribourg, Geneva and Lausanne, Episteme takes part in theresearch module on Epistemic, Rational and Social Norms , which involves the three universities and will begin on jan 1st, 2008. The research module aims at promoting new lines of research and integrating existing work on norms and values in three areas: epistemology, philosophy of rationality and mind, and sociology.

Three PhD students have been recruited for the project. The Epistemic, Rational and Social Norms module is divided in three subprojects and involves nine researchers: 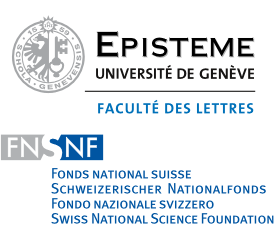