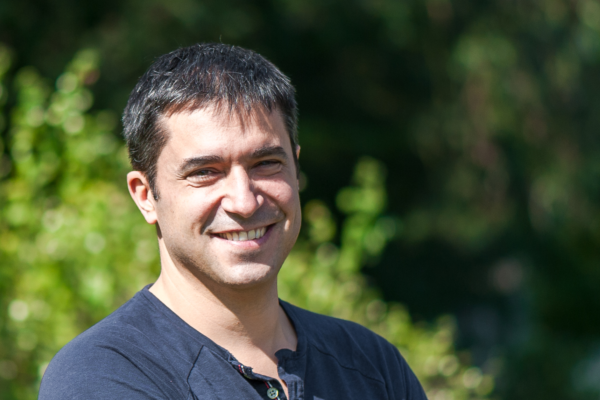 My research focus is on the mechanical and dynamic properties of lipids and proteins involved in membrane traffic. Specifically, how do these properties produce efficient membrane deformation, lipid and protein sorting within traffic intermediates, and fission of separating membranes?

My research focus is on the mechanical and dynamic properties of lipids and proteins involved in membrane traffic. Specifically, how do these properties produce efficient membrane deformation, lipid and protein sorting within traffic intermediates, and fission of separating membranes? I have previously shown that:

As a Ph.D student, I worked in collaboration with cell biologists (Bruno Goud’s lab, Curie Institute, Paris) and physicists (Patricia Bassereau’s lab, Curie Institute, Paris) in order to understand how membrane properties (e.g. bending rigidity, tension, and composition) facilitate or interfere with various stages of membrane traffic within cells. My main findings during this period can be summarized as follows:

a) I developed a minimal assay to study the formation of membrane tubules using the force generated by molecular motors. I coupled biotinylated kinesins with Giant Unilammellar Vesicles (GUVs) via streptavidin beads. Then, by allowing the GUVs and kinesins to sediment on a network of microtubules, I observed the generation of tubules growing at the speed of kinesin translocation (Roux et al. 2002).

b) Some lipids will spontaneously sequester into liquid-ordered (Lo) domains. These domains are characterized by an increased bending rigidity compared to liquid-disordered (Ld) domains. By fluorescent labeling of one such lipid species, I found that these lipids were partially excluded from membrane tubules pulled from GUVs by molecular motors (Roux et al. 2005).

My continuing interest in membrane fission led me to pursue post-doctoral work in Pietro de Camilli’s laboratory. In order to study the mechanism of membrane tubule formation and fission by dynamin, I created an assay utilizing membrane sheets on which I could monitor the activity of dynamin-induced tubulation. After the addition of GTP, I observed the contraction of the tubules and the formation of super-coiled membrane loops. This suggested a twisting activity of dynamin that I confirmed by attaching a small bead to the tubules and quantifying the rotation of these beads caused by dynamin-mediated GTP hydrolysis (Roux et al. 2006).

From July 2007 to April 2010, as a Chargé de Recherche in the CNRS, France, I have been interested in how membrane properties affect the polymerization of dynamin onto a template. An essential question about dynamin is how it is recruited to the neck of endocytic buds. By using a combination of micropipette and optical tweezers to extract tubules out of Giant Unilamellar liposomes, I could study the nucleation of dynamin polymerization onto tubules of radii ranging from 10 to 100 nm. I found that at a physiological concentration of 250 nM, dynamin is able to polymerize only on tubules comprised between 10 and 35 nm (19 nm in average) (Roux et al. 2010). This supports the idea that the build-up of membrane curvature during the formation of endocytic buds could spontaneously recruit dynamin at their neck.

From my earliest academic studies, I have been convinced that soft-matter physics could provide interesting tools and concepts for the understanding of living cell processes. Thus, I always tried to be at the interface between physics and biology. For my Ph.D. work, I chose to work in both cell biology and physics labs on the theme of membrane intracellular traffic.

Thirty years of membrane physics has led to reliable models and data describing the fundamental mechanical properties of pure lipid membranes. In contrast, intracellular traffic is a cell process that requires a great variety of mechano-enzymes to remodel, cut and transport membranes within cells.

My view is that the tools and concepts from membrane physics can fruitfully be applied to study membranes interacting with proteins involved in membrane traffic:

Moreover, many of the proteins use chemical energy to perform their tasks so equilibrium physics does not apply. Thus, understanding cellular trafficking requires the development of new theoretical tools and is a growing field of physics.

My long-term goal is to understand how protein and lipid assemblies coordinate to perform cell functions involving membranes: endocytosis, cell division, cell migration and others. These functions are based on essential physico-chemical abilities of membranes: deformation, fusion, fission, fluidity and permeability. I intend to understand how proteins exploit the peculiar physical properties of lipid membranes in order to proceed with their function.