Very far from the Earth and therefore difficult to observe, the first galaxies of the Universe were formed just after its birth. Nicknamed "baby-galaxies", they still remain mysterious. An international team of astronomers led by the University of Cambridge, including the University of Geneva (UNIGE), was able to measure their movement for the first time. Observed nearly 13 billion light-years from Earth, they swirled around their center in a similar way to the Milky Way. This discovery suggests that the gas contained in these newly formed galaxies already revolved around their center, like the "adult" galaxies resulting from the fusion and the growth of these galaxies. These results are published in the journal Nature. 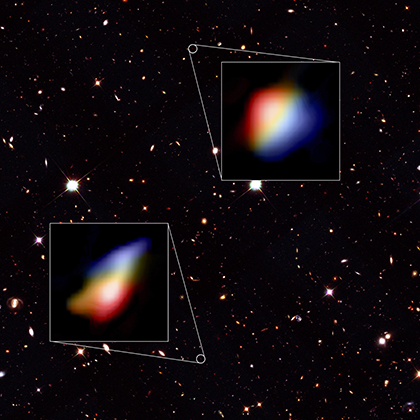 Two galaxies as they appeared 800 million years after the Big Bang (only 6% of the current age of the Universe), observed thanks to ALMA. The color gradient shows the movement of the gas detected by ALMA, which reveals a rotation.

To observe the beginnings of the Universe, astronomers have used special telescopes called radio telescopes. In fact, the Universe was originally filled with opaque hydrogen gas, making it difficult to observe the formation of the very first galaxies with optical telescopes. If this gas absorbs the visible light, it allows however to pass the far infra-red. Astronomers have therefore used the 64 antennas of ALMA, a radio telescope at 5000 meters altitude in the Chilean Andes, to observe two small galaxies born only 800 million years after the Big Bang, which is about 13 billions of years. By analyzing this light collected by ALMA, they were able to establish their exact distance and see the internal movement of gas that fueled their growth over time.

"It's a surprise, we expected these early galaxies to be very turbulent because of the frequent mergers between them and the chaos caused by the explosion of supernovae, many at that time," says Pascal Oesch, associate professor at Department of Astronomy of the Faculty of Sciences of UNIGE and co-author of the study. "But it turns out that these galaxies were already relatively ordered, although they had appeared so early in the history of the Universe. These "baby-galaxies", which were five times smaller than ours, were able to grow rapidly to become adults, like the one in which we are today, the Milky Way.

This discovery opens a door to the search for the formation and evolution of galaxies during the first billion years after the birth of the Universe, a period still little known to astronomers.
January 10, 2018   News