Using cosmic lens to discover most distant star ever observed 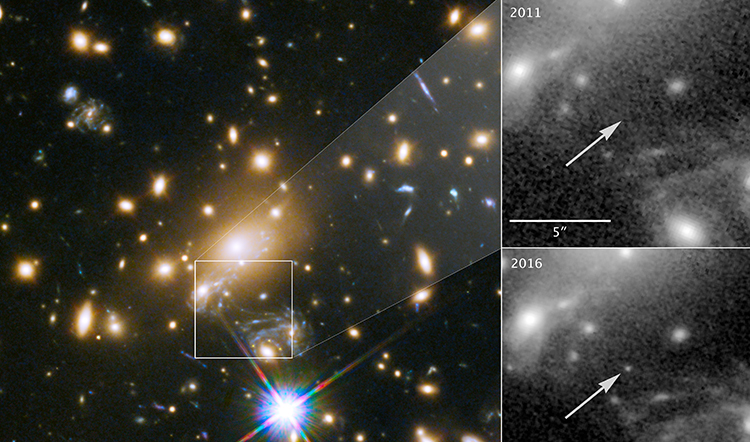 An international team of astronomers, including researchers from UNIGE, has detected the most distant individual star observed to date, located 9 billion light-years from Earth. This star, normally too weak to be seen, could be observed thanks to a gravitational lensing effect of a massive cluster of galaxies.

The international team was monitoring the cluster of galaxies called MACS J1149 + 2223, located 5 billion light-years from Earth as they made their discovery, "This star is at least 100 times farther than the farthest star we could study so far, with the exception of supernova explosions," says Patrick Kelly of the University of Minnesota, lead for the study. Combining the powerful power of this cluster with Hubble's exceptional resolving power, "we were able to observe for the first time a star some 9 billion light years away," added Jean-Paul Kneib, professor at the laboratory of astrophysics of EPFL. The detection of the star through Hubble was only possible because the light from the star was magnified thousand times.

In the case of Icare, the nickname given to this star, actually named MACS J1149 + 2223 Lensed Star 1, the amplification of light has momentarily reached a factor of 2000. Astronomers believe that this enormous increase is due not only to the massive cluster of galaxies, but also to a star in this cluster whose position coincided exactly with that of Icarus.
“The fortuitous observation of such a rare phenomenon, an individual star amplified thousands of times, has provided us with an enormous amount of information about the star, its environment and the matter encountered on the way to our telescopes” explains Antonio Cava from the astronomy department of UNIGE.
Scientists have been able to identify Icarus as a blue supergiant, several hundred thousand times brighter than the Sun, yet it was impossible to distinguish without the effect of gravitational lensing.
This discovery marks the beginning of a new way of studying individual stars in distant galaxies. With more research and the arrival of new, more powerful telescopes like the NASA/ESA/CSA James Webb Space Telescope, it will be possible to study the evolution of the earliest stars in the Universe in greater detail than ever expected.
April 13, 2018   News