From Mars to the Multiverse

From Mars to the Multiverse

This unique conference is given for the Diplomatic Club of Geneva.
It is open to the participants of the European Week of Astronomy and Space Science (EWASS 2014)
held in Geneva from June 30th to July 4th, 2014.
The academic community of the University of Geneva and CERN is also welcome.

The lecture will be preceded by an allocution by the President of the Diplomatic Club, Luzius Wasescha,
and by Prof. Thierry Courvoisier, President of the European Astronomical Society and of the Swiss Academy of Sciences.
A cocktail will be served at the end of the event. 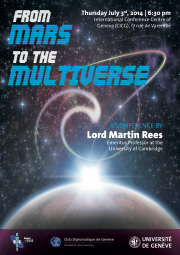